MRI and Quantitative Magnetic Susceptibility Maps of the Brain after Serial Administration of Gadobutrol: A Longitudinal Follow-up Study

Detection and imaging of gadolinium accumulation in human bone tissue...

"Recently, accumulation of Gd in bone tissue received deserved attention, especially given the fact that bone tissue retains Gd from GBCAs to a greater degree (23 times higher levels) compared to brain...
Bone tissue is metabolically active & continually undergoes remodelling ... Slow endogenous Gd release into the bloodstream is likely to occur & the risk is even higher in subjects with increased bone resorption (pregnancy, lactation, during menopause; in osteoporotic patients)"

Presence of other rare earth metals in gadolinium-based contrast agents

"In 22 samples of six different commercial GBCA, Sc, Y, La, Ce, Pr, Nd, Eu, Tb, Tm, Dy, Ho, and Er were present as impurities.
Although the RE are chemically similar, the other RE do not perform as Gd as a contrast agent; therefore, their presence in formulations may be a matter of concern."

Evaluation of Toxicity of Gadolinium-Based Contrast Agents on Neuronal Cells

"I The results of the present study indicated that exposure to specific GBCAs, even at low micro-molar concentrations, may have detrimental effects on neuronal survival. Further investigations are required to clarify the molecular mechanism underlying GBCA-induced cell death. "

"Patient exposures ranged from 1 dose to 20 doses of GBCAs including both macrocyclic and linear ionic agents. Gadolinium was found to be present in brain tissue in all children"

"The detection of significant amounts of Gd in RBCs and WBCs indicates that GBCAs can cross blood cell membranes."

"contrast is not biologically inert.[GBCAs] impair renal function, induce pathologic damage, and increase kidney fibrosis.
Gadolinium aggregates in the lysosomes of vital organs, such as the kidneys."

“After much uncertainty as to whether [gadolinium-based contrast agents] cause cellular toxicity, we now provide the first definitive evidence that these agents do indeed induce mitochondrial toxicity and cell death in cultured human neurons,”
"For all GBCAs, cell death increased with exposure dose…”

“Repeated [Magnevist] exposure is associated with gadolinium retention in specific regions, subregions, and layers of cerebral cortex that are critical for higher cognition, affect, and behavior regulation, sensorimotor coordination, and executive function.”

The Dark Side of Gadolinium: A Study of Arthrographic Contrast at Extreme Concentrations

“Radiologists should be aware of the bell-shaped signal intensity curve that gadolinium demonstrates on T1 imaging in order to recognize the potential complication of hyperconcentrated intraarticular gadolinium. Furthermore, even though it may be an uncommon error, radiologists should be able to recognize the differences between an inadvertent hyperconcentrated gadolinium injection and other intraarticular pathology”

Gadolinium-Based Contrast Agents: Why Nephrologists Need To Be Concerned

“[GBCAs], regardless of their chemical composition, are not eliminated according to a pure two compartment model; every brand seeps into slow-release compartments such as the blood brain barrier (and gadolinium has been found within the nuclei of central nervous system neurons).”

The Need for National Guidance Around Informed Consent About GBCA Safety

“The research protocol under discussion highlights where the [National Institutes of Health] Roadmap around [gadolinium-based contrast agents] falls short,”

Quantitative Analysis of Gd in The Protein Content of The Brain Following Single Injection of (GBCAs)...

“Intact GBCA are able to penetrate a series of brain barrier immediately after administration regardless the type of the chelate. Gd may be bound with macromolecules that may cause Gd retention in the brain.”

“Within one year, our institution’s [Mayo Clinic] metals laboratory had to cancel 42 selenium serum tests and 19 heavy metal urine panels due to potential interference caused by gadolinium.”

“Numerous symptoms that constitute the diagnostic criteria for ‘nephrogenic’ systemic fibrosis are occurring in gadolinium-exposed patients with normal renal function.”

The Gadolinium Hypothesis for Fibromyalgia And Unexplained Widespread Chronic Pain

“The hypothesis presented in this article, along with the support of scientific evidence, links FM and unexplained chronic widespread pain reported after a trauma, surgery, or medical illness to retention of gadolinium in the body.”

Gadolinium Deposition in The Brain: Current Knowledge and Recommendations

"Considerable evidence suggests that repeated administrations of GBCAs lead to accumulation of Gd in brain parenchyma and mainly in the deep brain nuclei....Although linear GBCAs have been primarily accused and subsequently
suspended at least in Europe, there is no doubt that repeating administration of macrocyclic GBCA could also lead to Gd deposition in brain parenchyma"

Gadolinium Enhancement of the Aneurysm Wall in Unruptured Intracranial Aneurysms Is Associated with an Increased Risk of Aneurysm Instability: A Follow-Up Study

"Gadolinium enhancement of the aneurysm wall on MR imaging is associated with an increased risk of aneurysm instability."

"The increasing use of gadolinium-based contrast agents (GBCAs) for magnetic resonance imaging is leading to widespread contamination of freshwater and drinking water systems. Contrary to previous assumptions that GBCAs are stable throughout the water cycle, they can degrade...UV radiation can alter GBCAs and their transformation products may enhance the risk of adverse health effects"

Establishing Reference Intervals for Gadolinium Concentrations in Blood, Plasma, and Urine in Individuals Not Previously Exposed to Gadolinium-Based Contrast Agents

Because of medical pollution, gadolinium now joins “aluminum, arsenic, cadmium, lead, lithium, nickel, silicon, strontium, and tin,” as a detectable via “ingestion of contaminated food and water or via environmental exposure.” 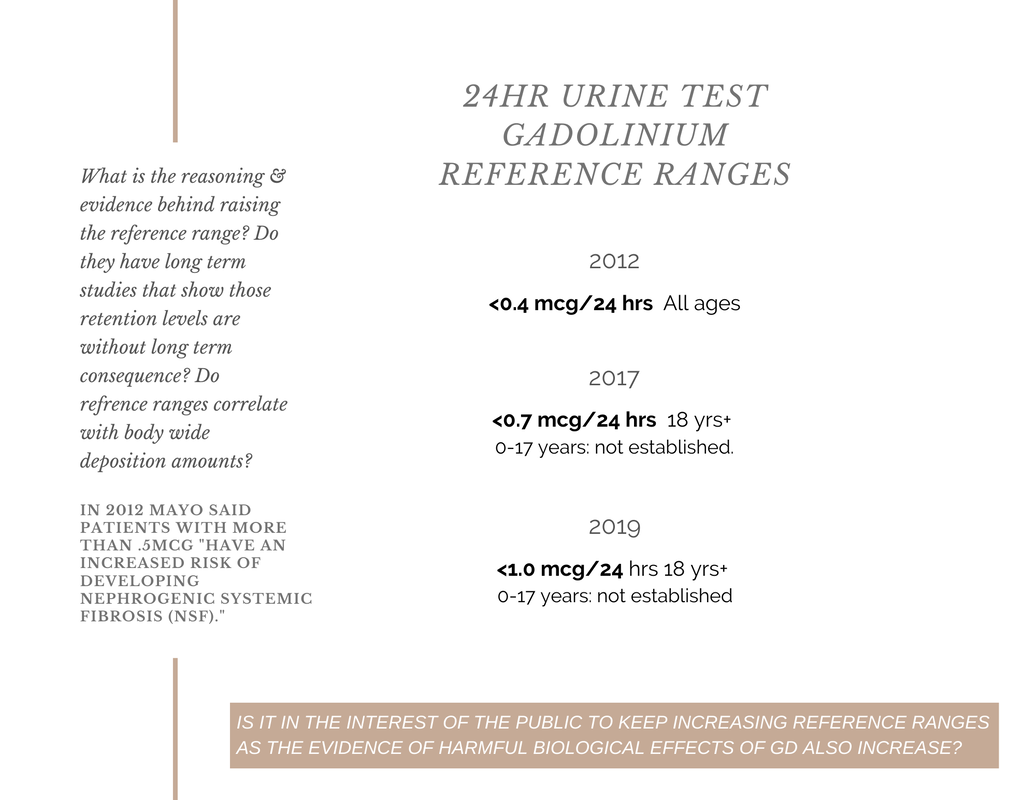 For the purposes of this review, detection of gadolinium weeks or months following GBCA administration is considered abnormal as gadolinium is a trace element and not involved in any physiologic processes; the levels of gadolinium in the body considered normal in the absence of any GBCA exposure is, for practical purposes, zero." FDA Medical Imaging Drugs Advisory Committee Meeting, Briefing Doc pg. 16, September 8, 2017

A scientific attitude is of great importance, but we must recognize that science has absolutely nothing to do with the 'consensus of the authorities.' You are less likely to do the wrong thing if you believe that 'the authorities are always wrong because then you will begin to question their assumptions, evaluate their evidence, & examine their reasoning. Dr.Ray Peat

This website is intended for information purposes only & is not medical advice.